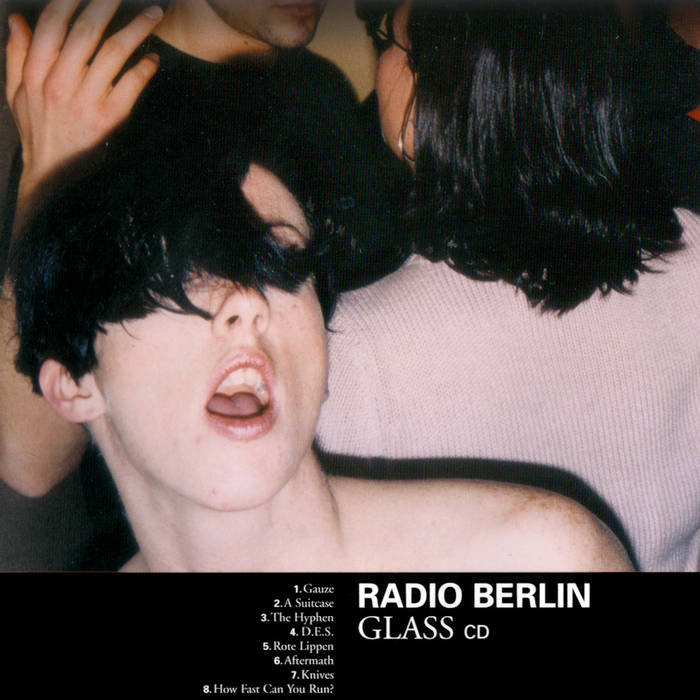 Jn Fr Bleak, dark, and brilliant. Since more than ten years I believe this album is one of the best ever recorded in the 21th century. Favorite track: Rote Lippen.

"The third album from this incredible, under-rated, post-punk group, “Glass” shows the band forging their own unique and contemporary sound out of a legacy of brooding post-punk sound shared by past and present UK based guitar/synth "new wave" acts. This is Radio Berlin's finest and most important material to date." - original press blurb from the album's 2003 release.

“Although they haven't transcended their late-'70s post-punk/goth influences, Vancouver's Radio Berlin has added some Gang of Four-style hard funk to their bleak sound. It injects a more muscular approach to their inherently dark and foreboding genre. They have nailed the Euro-trash concept, and only by reading the bio would the unsuspecting Anglophile know they hail from North America, let alone Canada. Percussion machines spar with real drums, as thumping bass and echoed guitar provide the stripped down rhythms. It's an intentional throwback to the early Joy Division, Psychedelic Furs, Japan, Bauhaus, and Cure era, but some of these songs are strong enough for Radio Berlin to be more than just a cover band. Still, it's the edgy bass riffs that energise tracks like "Rote Lippen," and keep the music from being a parody of its forbearers. Certainly the haunting David Bowie/Peter Murphy vocals and goth lyrics such as "take a bite out of your lips and there's blood on everybody" aren't forging new territory, and the songs, while not carbon copies, are similar to others from that time period. Regardless, there aren't many bands recreating this dated sound so realistically in 2003. Radio Berlin is comprised of talented musicians dedicated to a genre that most listeners will never get a chance to experience live. In other words, they're preaching to their own black-clad, pale-faced, alienated choir, but anyone still listening to Joy Division will want to turn on this radio.” - Hal Horowitz, 2003

Track 9: "Towers Above You" is a previously unreleased track called which was recorded in the sessions for this album but was shelved due to not fitting with the album's programming.

Track 10: "The Hyphen (JJD Ambient Version)" is an unreleased ambient version of the track "The Hyphen". This track was programmed and recorded by Jack Duckworth in his home studio in the spring of 2003.

Track 11: "Bright Things" was recorded in the spring of 2004 at The Hive Studios by Colin Stewart at The Hive Studios and released on the Kill Rock Stars compilation "Tracks & Fields" in 2004. This song was recorded with around four or five other songs intended for a follow up album to "Glass" but never was completed. Personnel on this recording: Jack Duckworth: guitar, vocals / Chris Frey: guitar / Lyndsay Sung: synthesizer / Brad MacKinnon: drums

The rescanned CD artwork from the 2003 release contained in the download in PDF format.

Recorded in sessions from October 2002 to April 2003 at IZ Tech, The Factory and The Hive Studios.
Engineered by Colin Stewart with assistance from Byron Bowen and Jordan Koop.
Mixed by Colin Stewart, Josh Wells and Radio Berlin.
Photos by Chris Frey.
Design by JJD for The Wax Museum Designs.

Radio Berlin were a post-punk group from Vancouver, existing between 1998-2005. This store was set up in January 2015 to make available again their three core albums (now all out of print): Sibling, The Selection Drone and Glass. More info at www.radioberlinarchive.com ... more

Bandcamp Daily  your guide to the world of Bandcamp